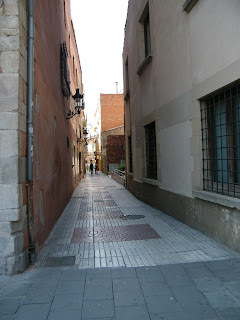 Today, as I was walking along the street with my little trolley on the way to the supermarket, my attention rested on a man whom when he saw me, stopped and hissed through his teeth. I didn't understand the sound, and looked closer at his face. He was smiling in what can only be described as lurid. I ignored him and kept walking.

After a few steps I realised he was following me. In which case I hastened my step, and continued a long the street wondering what I was going to do. If I went to the shops, he could corner me in one of the aisles and to be stuck with such a man in a small area was much worse that being on  a relatively crowded street. I decided, that before I changed my shopping trip strategy, I should be sure if the man was such a creep.

I stopped in front of the fruit and vegetable shop and looked with interest at the oranges on display. The man walked passed, and much to my horror, stopped and turned and started walking towards me hissing.

I turned to him, and said loudly 'stop it. Just stop it.'

He said, in Spanish, that he didn't understand me. I told him to stop it, loudly, and started to turn to passers by in an attempt to embarrass him. He just smiled in such a foul way, I wondered where he came from and for how long he had been doing this for. He was hardened.

I called the attention of two young men walking down the street who stopped and looked at the man. I walked passed them all, and went to a different supermarket a few streets away.

Honestly, I kept looking over my shoulder to see if he was there.

I kept thinking, but, what did he do, actually? Imagine I had to explain to police what happened. And actually, nothing much happened at all. But the feeling he gave me, was oppressive. He had very evil intentions.

Anyway, although I felt unhappy for twenty minutes or so, I was glad I didn't just ignore it. That I faced the man, and said something instead of pretending. I'm not going to walk down the street being afraid, just because of one man.

Email ThisBlogThis!Share to TwitterShare to FacebookShare to Pinterest
Labels: fears 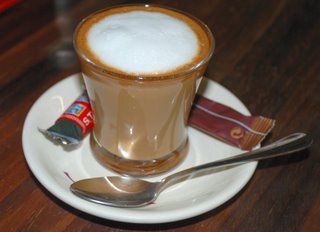 I don't know if it was the cortado taking immediate effect, or the too full glass of wine I had for lunch dousing my sensitivity, but I just had an about turn.

I was standing at the lights, waiting to cross when an old woman in a car was hesitating to turn. Another car behind her, beeped loudly and insistently, and I laughed. Well, inside. When the 'beeper' went past, and I saw the look of cool disregard on her face, I laughed a bit more.

Maybe my British heritage is finally loosing up here, as it turns into spring time, melting away as the last of the snow.

Photo taken from C's
Posted by Tiffany at Patheya at 4:13 PM 1 comment: