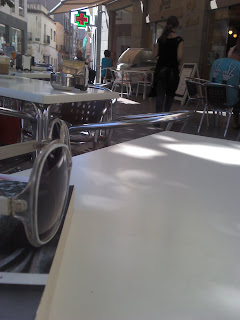 Its Festa Major. Every now and then someone let's off a firecracker of some sort that is incredibly loud.
Today one went off while I was drinking my coffee at Ferrer. Across from me a small family were seated eating donuts. They have a little boy of 3 or so. When the firecracker went off, the child became very still for a moment and then continued on as normal. The parents were laughing and jumping about, as were others, but the child acted as nothing happened.
Dogs were barking, another child started crying and one of the waitresses said 'fuck', and the child, even stuffed as he was on white sugar, didn't do a thing.

Posted by Tiffany at Patheya at 12:06 PM