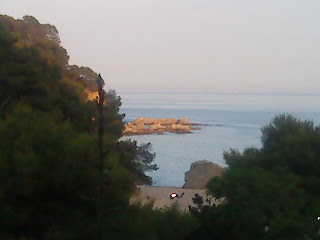 Here we are on the costa brava for the weekend. The sound of waves, children and birds. I can even see a cruise ship in the distance. Happy summer!
Posted by Tiffany at Patheya at 8:31 PM No comments:

Jett off to norway for the summer. 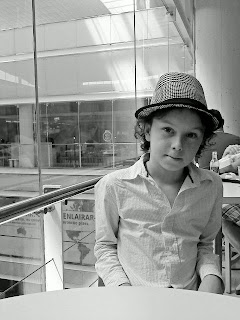 Jett left for norway today. There was a two hour delay in his flight because of some french air strike. But now, we're off to the beach. Have a great summer!
Posted by Tiffany at Patheya at 3:19 PM No comments:

Food of the world. 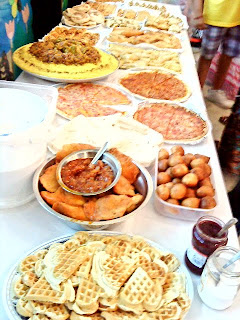 Tonight we have a food fantasia at jett's school. Everyone is dressed up in beautiful costumes and there is really a global feeling in the air.
Posted by Tiffany at Patheya at 8:19 PM No comments:

What happened on the Camino de Santiago? (part two) 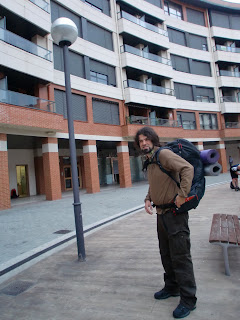 Our albergue in Najera was in a large apartment block that was once a bullring.
Typically, we would go to bed at about 11, and wake up about 7. That was the aim. In the different albergues, there were different rules about when the lights went out, and when they went on.  Some mornings everyone was up and talking at 6, so of course, we also got up with all the noise. We were usually some of the last pilgrims to leave the premises.
We discovered that it was better to walk about 5 k’s before breakfast. Usually we’d have a piece of fruit and a muesli bar ready for the first hour or waking. Then we’d find a bar somewhere and have a bite to eat. 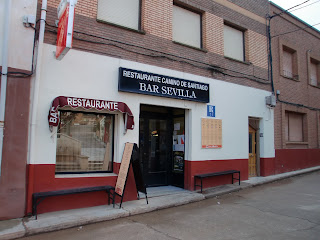 At first I enjoyed the potato omelette. Its really more like a fat potato cake, and with lots of oil, it was delicious.  But, after the first week, I couldn’t eat eggs anymore. The thought of another egg was churning my stomach.  Sometimes I’d just have toast and jam. Because the weather was so bad at the beginning, I found a lot of comfort in the coffee stops.
Then we’d walk for about 2 hours or so, between 8- 10 kilmometers, and then we’d stop for a rest and drink. 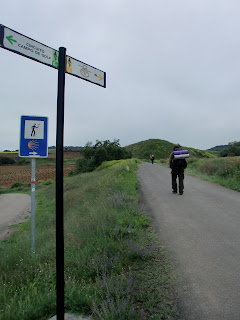 Then we’d start again, and after another 2 hours, we’d stop somewhere for lunch. Sometimes we bought something from the supermarket, but more often than not, we stopped in a café.
Then we’d walk again – on the big walking days, when we did more than 30 k’s, we’d have a longer lunch, and arrive at the  albergue at 6pm or so. Sometimes, we could be finished between 1 and 3 in the afternoon. 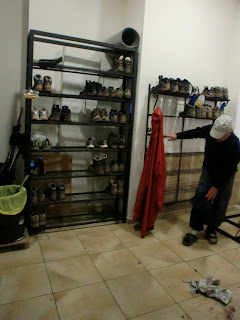 All shoes were usually left in another area of the albergue, than the sleeping area, much to my great joy.
When we arrived at the Albergue, you’d find people already asleep on their beds, and we’d rest for a moment before showering, washing clothes, setting up the bed, organising food, writing anything down, and discussing anything pertaining to the trip. We’d talk to other pilgrims and find out where they had come from, and where they were going the next day. 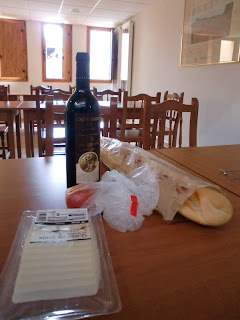 Some of the Albergue’s served a pilgrim’s menu, costing anything between 6 -10 euros. There would often be a full bottle of wine, and a three course meal given to each pilgrim. I guess that helped with the snoring every night.
Everyone went to bed relatively early. People had to attend their injuries, blisters and sore muscles. 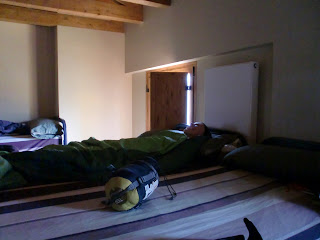 Then it would start again the next day.


Part One of our Camino memoirs.


(All photos taken by Albert Vila or Tiffany Jones - along the stretch from Najera to Santo Domingo de la Calzada (approx.22 km) on the 3rd of May 2010)
Posted by Tiffany at Patheya at 11:09 AM 2 comments:

What Happened on the Camino de Santiago? (part one)


On the fourth or fifth day, Albert asked me ‘what did you expect? A nice walk?’ and honestly, yes, I did. I expected it to be a bit tiring, but the reward of good food and wonderful weather and the contentment of an exhausted body and great night’s sleep would more than compensate for that. 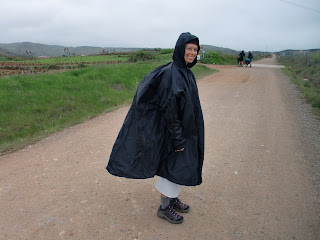 
And that was 12 straight days of rain. I’m not kidding. May 2010 – look it up. Its in the record books as being the wettest month for something like 40 years, and also the coldest. It was snowing, hailing, storming. And still we trudged along.


We made jokes about stealing images off the internet and posting them about our trip, while secretly heading down to any tacky holiday destination. (Ibiza was top of our ‘joke’ list). 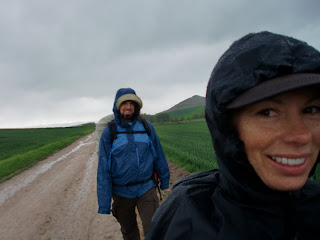 Yes, yes, its all funny, in hindsight, but when you are walking about 30 kilometers a day, your clothes are not quite dry from the day before, you can’t look up because you get slashings of rain in your face and so you only look at the orange mud on the ground and watch it being caked to your soaking hiking boots, its not that appealing.


It was Albert’s worst time. He was sweating, and cold, and we really thought that ‘soon’ it would have to end, this out of season weather, but it just kept coming. Strangely enough, there was some relief. There were many others ‘suffering’ along with us. People would comment with different levels of sarcasm, or just out right complain, or even tell us stories of how when they first started it snowed and covered all the signs, so they didn’t know where they were going.


Nobody was prepared for the weather. I’d bought light summer clothes, and finally we had to buy a few things to keep me warmer. Most of the people wore all of their clothing both day and night. We stopped more often than not, just to warm up in coffee shops, rather than to seek out rest.


On the Camino de Santiago, the pilgrims (whether religious or tourist) usually stay in Albergues. These are cheap (ranging from 3-15 euro) establishments set up specifically to meet the frugal means of pilgrims. That is, they have a bed, a shower and somewhere to wash/hang clothes. Every Albergue is different. Some are surprisingly comfortable, and others are downright spruce with cold running water and no doors on the showers. There are municipal Albergues and private ones. Of course, usually the private ones are a bit more expensive, and offer varying services. 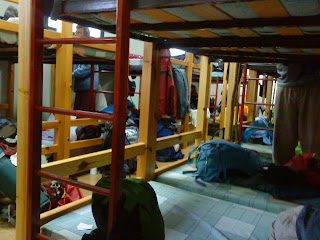 Sometimes there were four to a room, and sometimes one hundred. Sometimes people were smelly, or snored, or talked, or let their alarm go off, or let their phone ring, or generally didn’t care at all about other people in the room with them. But one thing you can be guaranteed of, and that is one person, at least, getting up at about 4 in the morning, with a torch, or worse, a light attached to their forehead, that started to repack their bags, slowly. They would look around, and flash everyone in the eyes with their headlight. It was an amazing thing.


If you had an ache, or a pain, or suffered in anyway, other pilgrims would come at you with their bag/s of medicine and offer you all sorts of pills and creams for your well being.


No matter what had happened to you, someone else would always have a worse tale. You can never outdo an Irish for complaining, so don’t try.


And for every bit of complaining I’ve done, I have to admit, I loved it. Every bit. Even the pain, even the weather, even the snoring. It was all great. It’s a wonderful experience, somehow, lifted out of the world, and yet, in it. Some people we met do it every year. They get addicted to the kindness of people. They get addicted to the helpfulness and pilgrim spirit. 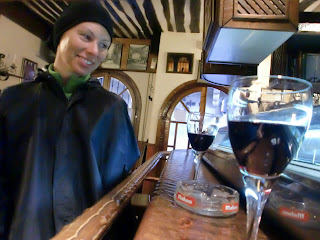 I must admit, with a bag of only a few changes of clothes (I started off with two but because it was so cold ended up with three), no makeup, one pair of sensible shoes, one set of toiletries between us – and the absolute bare essentials) we were all stripped of out typical armour. It made us similarly naked of the modern entrapments. We just walked, carried our small bits and pieces, and ate and slept. We shared some stories, some food, sometimes some wine, and we shared the remarkable spirit of the pilgrim. It was in and out of time. The past, the present, it was all mixed up in the moment.


Part Two of Our Camino Memoirs
Posted by Tiffany at Patheya at 3:58 PM 2 comments:

Why i can't fit into my old white pants. 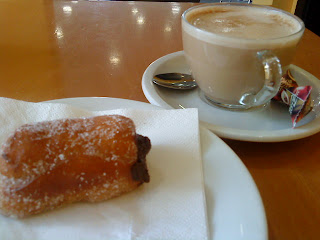 Chocolate filled xuxu in my corner bakery. . .
Posted by Tiffany at Patheya at 11:35 AM No comments: